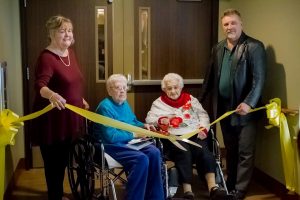 Born in Richland Center, Janet Hopper grew up in Viola through the sixth grade. She comes from a large family and they lived on a farm on a hill. As an adult, Janet joined the Air Force, married, had children, and lived in Indiana and Florida. As the only sibling who was single and able to make the move, Janet moved back to Richland Center in 2007 to take care of her mother.

Always interested in women’s ministry, Janet earned her Master of Arts in Christian Education and Women’s Ministry. Her bachelor’s degree is in adult education. She’s used the principles she learned in every job and is passionate about helping women get back on their feet. Caring for women is a service that was also important to Janet’s mother, Mary, who was a midwife even before the first hospital was built.

When Janet’s mother, Mary, was falling and passing out, the family had Mary go to Pine Valley Community for Rehab for almost three months. She then had the option to move into assisted lving, but wanted to move home. Janet was working part-time and quit work to care for her mother, but the fainting episodes continued. After an emergency in February, 2015, the doctor recommended that Mary stay at Pine Valley, and Mary agreed.

Janet likes that her mother interacts with others, likes the food, and has her own room. Mary loves sew cook, read and sew but isn’t able to see well enough to do these things, but does listen to “talking” books. Mary chose Pine Valley the first time, and really liked the people. When it was time to move back, she chose it again.

Mary’s a country girl and likes life to be simple. When she moved back to Pine Valley Community Village, everyone welcomed her and remembered her. She likes the physical location, in the country. She wants her new room to face East, toward the sunrise and farm land.

All of the kids were fine with Mary’s choice of Pine Valley as her home. She knew for years that it would be her choice and that she’d know when it was time for her to have nursing care. She talked to each of her adult children to make sure they agreed to what was going to happen. Mary is 92, she can walk a bit and won’t use a wheel chair. She likes to go out to eat, and out to see people. She also likes that there’s someone on the end of a button at Pine Valley in case she needs help.

Janet says that Mary’s looking forward to being able to get outside in the courtyard. And that she likes that the new building is all single level. It makes it easier to visit people. Janet has seen generations of employees and long-term employees. She likes the friendliness and care at Pine Valley Community Village, and that the employees are glad they work here.

Sign up to receive newsletters from Pine Valley Community Village.